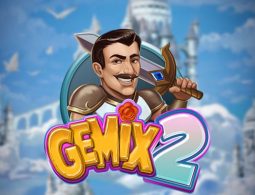 Gemix 2 slot runs on Play’n GO software and features 7 reels and cluster paylines that is a sequel to the original and unusual Gemix slot. For those who are not familiar, the slot is magic inspired and great looking dream jewel slot. Experience the unparalleled magic boost here for fun, or at any Play’n GO Casino for real.

How to Play Gemix 2 Slot
Set your bets and let’s remember some of the most popular songs while spinning and winning.

Increase and decrease your bets with the help of Quick Betting Panel.
Once the bets are set, hit Spin to get the reels moving.
If you get tired of manual spin, hit the Autoplay and choose the number of spins that you want to have with no interruptions.
Slot Features
The world concept we had in the original is kept in the sequel as well. But let’s take a closer look and look for the similarities and differences in Gemix 2.

Crystal Charge
Crystal Charge is a series of bonus features which are activated after you collect 25 winning symbols. There are 4 charges which are randomly awarded in the spinning ball that is set on the right side of the grid. The charges include Nova Blast, Crystal Warp, Light Beam and Chain Lightning. This is retained almost the same as in the original.

Nova Blast Charge will make one gem explode and it will destroy all adjacent symbols. Crystal Warp will randomly target one symbol and matching ones will be transformed in other symbols. Light Beam will blast one symbol with a ray of light both horizontally and vertically transforming those symbols into matching ones. Chain Lightning will cast a chain lightning flash that will transform all hit symbols into one of the corner symbols.

Super Charge
With 25 or more symbols you will activate one of the 4 Crystal Charge effects, however, for 50 or more you will activate Super Charge which will award all 4 effects simultaneously and add x2 multiplier to boot. Retriggering, with an additional 50 symbols will raise the multiplier by increments of x2 and will go as high as x20.

World Wild
There are up to 4 different guardians that can appear during the play and they each carry unique symbol. These trigger randomly and you should not be surprised if Wilds turn into Miner Wilds when Crystal Charge gets triggered. In order to progress from one world to another you will need to clear 2 patters provided on the current world in order to move to the next one.

Miner World will give you up to 10 Miners’ lamp Wild symbols which will be added to the grid. Knight World gives a x2 Shield that behaves as a single symbol and it subs for all symbols with x1 multiplier, you can see up to 2 Mega Wilds appearing. Princess World gives a Mirror that is a Wild with Spread capabilities. Merlin World gives 5 Book Wilds that are Sticky and can appear in random positions.

Pick a Pocket
The travelling merchant G-Nome looks like a shady type but he will clear a world each time he appears. He will offer the chance to pick one of his pockets for a chance to win the World Bonus.

Summary
Gemix was a smash hit the first time it got released and became a cult, so it’s no wonder that the game got a sequel. Gemix 2 is rich in features and action, and dare we say that it’s maybe even better in some aspects than the original. It’s a fun filled medium volatility slot with max win cap at x7500 your bet that is sure to secure many hours of fun. Overall, it’s an impressive slot that you will not regret testing.