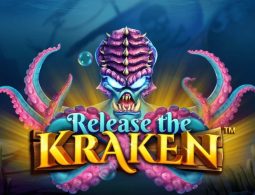 Release the Kraken is a high-variance, sea-themed slot machine. The game takes place at the bottom of the sea. In the background, we can see a sunken ship. The soundtrack feels like it was ripped straight out of a Pixar movie.

The game’s symbols also contribute to the maritime theme. They include several fishes, a turtle, and a Release the Kraken symbol. Air bubbles serve as wilds. The ship serves as a Bonus symbol. The ship’s steering wheel gripped by one of the Kraken’s tentacles is used for Free Spins. A chest surrounded by the Kraken’s tentacles serves as the chest bonus. Overall, the atmosphere is closer to Finding Nemo than a slot with Kraken in its name. Horror fans need not apply.

Pragmatic Play is a well-established provider with a large collection of online slots. Here are just some of their popular, highly-rated slots:

If you like underwater life-themed slots, you can check out the Release the Kraken free demo right now on playamo.net.

Now let’s take a closer look under the hood of the slot.

Release the Kraken is a high variance slot that boasts a great return-to-player percentage of 96.50%. The slot has a five-reel, four-row layout. It features 20 paylines (40 during free spins). The minimum you can bet is 0.20, and the maximum bet you can make is 100. The maximum amount you can win is a whopping 10,000 times your original bet.

Release the Kraken bonus rounds consist of such features as the Sunken Treasure Bonus Game, Kraken Modifiers, and Roaming Kraken Free Spins. The Sunken Treasure bonus game is triggered by getting 2 bonus symbols and a chest bonus during the same spin. During the bonus game, three chests will appear on the screen and reward the player with treasure.

Kraken modifiers appear randomly and consist of Kraken Lockin Wilds, Colossal Kraken Wilds, and Infection Kraken Wilds. Roaming Kraken Free Spins are triggered by two Bonus symbols and a Free Spins symbol. During your free spins, the game’s paylines expand to 40. Want to check out these mechanics for yourself? You can check out Release the Kraken for free on playamo.net without even having to register.